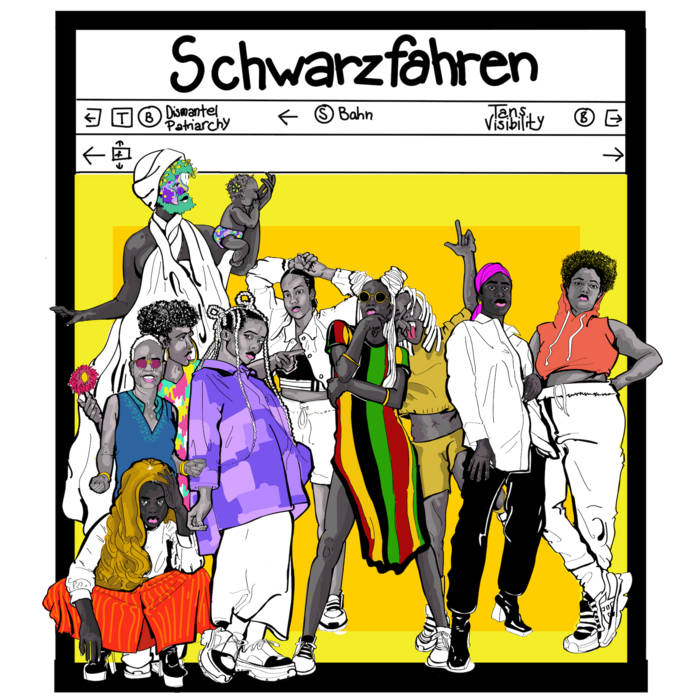 Berlin rapper and producer Breezy made the decision to produce an album uniting Black, FLINTA and queer musicians* from Berlin after the international protests of the Black Lives Matter movement in the summer of 2020 caused a worldwide stir: "I felt like there were so many divisions among the Black community that we would never get on the same page and that Black women and Black queer people especially were being left the most vulnerable."

Her feeling of dispersion in such a global and important movement resulted in the approach for the idea of the album: a common platform for diverse realities of life of POCs and especially queer and FLINTA people from Berlin, which Breezy unites through her producing skills. Featuretracks with Nasheeka ("Decolonize & Moisturize"), Ys4jd, Natalie Greffel and Okcandice ("Decomposition") or BabydoJos and Barbara ("Etchin' N Itchin'") result in a beautiful kaleidoscope of rap, vocals and poetry. But Breezy also grants a space for her personal perspective with solo tracks. For example, "Get Out" describes the process and feelings of her emigration story from the U.S. to Germany behind a political and social motif: "Everybody left, too insane in the brain / when ya mother, father, sista, brotha, cousin gettin slain [...] Messy ass system of public education / it ain't the 60s and still segregation." With "#sayhername," Breezy again ties into the BLM movement, writing a dedication to activist Kimberlé Cranshaw, who established the hashtag in the title, with the song.

The album title "Schwarzfahren" is on the one hand meant as a play on words; thus the album is to be received as a fast ride through different life worlds of Black musicians*. On the other hand, Breezy uses the title to draw attention to the fact that Black people are often suspected of criminal behavior in everyday activities: "Another thing about the word is the feeling of behaving 'wrong', which is something Black people are accused of for simply going on about our lives." - The serious consequences of such a racist general suspicion can be seen in the USA as well as in Germany.

Thus, Berlin-based musician Breezy succeeds in creating a collabo album that focuses on strong content and important perspectives on a sound-aesthetic level and demonstrates the diversity and greatness of the Black, FLINTA and queer Berlin music scene.

Breezy exists in the liminal space between Black and white. Based in Berlin, she is an artist, music producer, and maker of mulatto music.

Bandcamp Daily  your guide to the world of Bandcamp